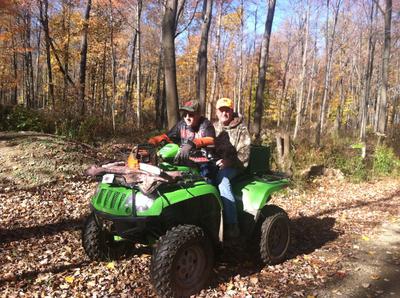 My son Jeremy, now almost 16 years old, use to hear noises from afar and have to know what it was! I remember the city engineers trimming the trees on the boulevard in front of our house and Jeremy would wake up, get himself dressed and go directly outside to investigate! The problem was that Jeremy was three years old! It did not stop at that, if a landscaper came to the neighborhood to mow a lawn, he was outside at the crack of dawn, overalls, boots, baseball cap on & usually with a toy lawnmower! Jeremy could hear machinery from blocks away! But it didn't stop there.

Then he would stop whatever he was doing and perk up like a dog when he heard sirens or whistles in the background. If I was around i watched him go and chase the noise and chase him, if I wasn't around, I would figure out 5-10 minutes later that Jeremy was gone from the house or the back yard and have to chase him down!! One time when I took Jeremy & his sister for a walk in a double stroller, he abruptly unlocked his safety belt, jumped out of the stroller and was running to a noise! Something he had never heard before! Obviously, I had no choice but to chase after him with the stroller and where did we end up...three blocks away at a house where the owner was power-washing his windows & garage doors! These stories are just the beginning. That was 2004, when he was 4 years

Today, at 15, he still has a huge attraction for machinery noises, but usually tells us exactly what it is he hears! Chain-saw versus power saw, push mower versus riding mower, fire truck versus ambulance and so on.... The difference now as well is Jeremy has been so intrigued with machinery over the years that he not only had to know what noise he was hearing, but later around age 6 or 7 started watching, learning & using the machinery! Now he can use & fix a push lawnmower as well as a tractor with a backhoe with ease. He can cut or trim trees with hand saws, chain saws & even go up in a pulley! He drives an ATV with a utility trailer & fills it completely with fire wood that he cut or split! He takes apart snowblowers etc..& fixes them like he's been a mechanic his whole life!

That fall day in October of 2004, when I chased Jeremy to a strangers house to meet a power washer myself was the beginning of ten plus years of Sensory Integration Disorder for not only my son Jeremy but for myself as well! My husband & I knew he was different then, and he is still different today, but SID and his special hearing perception have helped Jeremy to be curious, smart, love the outdoors and most of all not be afraid to try new things and get dirty!! We could not be more proud of him and how those first sounds made him the young man he is today.

Join in and write your own page! It's easy to do. How? Simply click here to return to ADD & ADHD Resources.