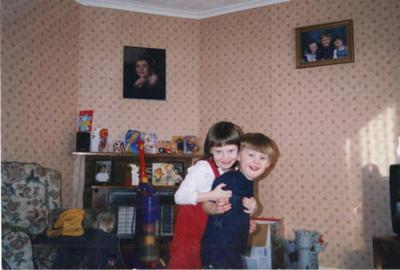 When I was 8 yrs old, my baby brother 5, he was diagnosed with this condition and I can remember feeling jealous that he was allowed to go to a 'special play area' several times a week, but I wasn't. I understand it now that it was a sensory seeking environment that probably helped him so much. He didn't talk until he was 3, and as a toddler preferred crawling to walking. He liked video games and knew which buttons to press, but couldn't press them himself so would sit beside our mother whilst she followed his button instructions.

He could not throw a ball and catch, hop or even balance on one foot. But the thing I most remember is his left hand would always be touching his left leg- preferably under clothes, but this did look 'wrong' so we encouraged him to perhaps not shove his hands down his trousers, but rather lay it visibly on the outside of clothes! This was because he couldn't feel his left leg, or wasn't sure where it was unless he was touching it. This seemed to me how his body was, disconnected in his mind unless each part was being stimulated. My parents told me it was because every limb (to him) felt like pins-and-needles.

But in subsequent years he has learnt so much. He can now play computer games with such ease he subconsciously holds the controller over his head whilst playing! He can catch and throw a ball (all be it with the occasional drop, but that is to be expected). He can balance on either of his feet for a reasonable (for him) length of time and no longer keeps his body in check by holding on to it.

He didn't learn to ride a bike until he was 12- he wasn't ready before. We were all so proud of him, as it had taken so long I had doubted he ever would. Unfortunately he has since entered his moody teen years, but I have seen him achieve one more 'impossible task'- he has taught himself to play guitar. This was something I never thought would happen as playing guitar does require enormous hand-eye co-ordination (of which he has always lacked). But he has achieved all of this. Yes he will never be the best at P.E. or win any sports contests, but he has proven to us time and again that he can overcome the physical obstacles in his way and achieve his own ambitions.